Meet the CTC Board Members 我们的CTC成员

Mark Clayton is a qualified accountant from the UK. He arrived in China in 2005 and has been living in Zhuhai since May 2007. Mark is the CFO and partner in a British Manufacturing Group. Mark's passion is charity and giving back to the community, his greatest achievement was received in February 2019 becoming an international Peace Award laureate, which recognised his work in the Field of Philanthropy over the years by the Sino-Phil International Peace Foundation. With a love of children and community, Mark has been an active part of the Zhuhai community and the CTC since its formation and is looking forward to seeing it grow and benefiting more children every year. With his background in accounting he ensures that everything is 100% transparent.

Sunny, originally from Henan, moved to Zhuhai 12 years ago. She became involved in CTC after working for InternChina, and has been an active participant in all the editions of the Come Together festival. She is now a full time mum of two children, and shares her love for children through the many programs and initiatives funded by CTC, wishing that she will be able to carry on contributing to the charity in the future.

Paul Bailey moved to Zhuhai in 2012 from the British island of Jersey, and became a part of CTC in 2015. He currently manages the Australasian and South East Asian partnerships for Pagoda projects, a company that offers work-integrated-learning experience in China and other Asian countries for foreign students. Paul and his wife Kate first became interested in contributing to children’s charities when travelling to South East Asia, and are now grateful to have the opportunity to contribute towards worthwhile causes in Zhuhai. Not only is he a member of CTC’s board, but he is also a keen musician himself, and has performed at previous Come Together Festivals.

Luke has always believed in the power of community service. While growing up, he was active in community clean-ups, clothing drives, Habitat for Humanity, Boy Scouts, and other service programs. Bringing these ideals with him to China, Luke jumped on the opportunity to help create the CTC organization. Over the last twelve years, he has seen the Zhuhai community grow and develop, and is excited to help out where he can.

Dr Billy C. Chan is currently the Director, Executive Assistant to the Dean of the Faculty of Medicine, at Macau University of Science and Technology.
He is also the Vice Chairman of the Advisory Board at the Macau Healthcare Promotion and Management Association. He is a Standing Committee Member of the International Trauma Rescue and Treatment Association in Beijing, and Honorary Consultant for Peking University People’s Hospital. He is also an Honorary Professor at the First School of Clinical Medicine BUCM, and Executive Council Member of the World Association of Chinese Doctors. For the Portuguese speaking world, he is an Honorary Member of the Brazilian Medical Association, and Honorary Vice President of the Angola Chamber of Commerce in Macau for Medical Affairs.

Dr Chan is a regionally acknowledged frontrunner in healthcare simulation. Over the past 18 years he has contributed to the arena of medical simulation by introducing skills training programs to advance positive outcomes and reduce errors in the Commonwealth of Australia, New Zealand, Hong Kong SAR, Macao SAR and mainland China. He is also officially recognized as “Sir Billy Chan” as he was conferred with Knight Commander of Rizal, Lifetime Member of Order of the Knights of Rizal. Dr Billy Chan is the Chairman of the Board of the SINO-PHIL ASIA INTERNATIONAL PEACE AWARDS FOUNDATION, INC. which is dedicated to enhancing the quality of life for all humanity.

Andy Board, originally from England, has now lived in Zhuhai since September 2006. Andy came to Zhuhai to set up a factory on behalf of Bowers&Wilkins, and believed this would be a temporary assignment. However, he remained in Zhuhai, fascinated by its environment and its people, still working as the GM for Bowers&Wilkins but also committing to other projects such as owning part of a European restaurant, being active in the fitness scene, and being a board member of CTC. The role he plays on the board of CTC is that of sponsorship manager.

Alex Wise arrived in China in 2012, and has 7 years experience as an English teacher in Zhuhai. Hailing from Yorkshire, England, Alex has a degree in Physics and before moving to China worked in the banking sector for 5 years. He has now been volunteering for CTC for over 4 years and has recently took on a more involved role within the charity as Project Coordinator. 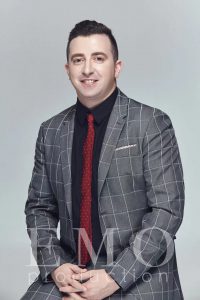 Sean Moran hails from Ireland,he is the co-founder and CEO of Sean Global Education, He is a specialist in education with a decade of successful experience in developing English Training Schools in China. Sean specialises in identifying new and innovative educational brands for the Chinese market and regularly attends national training sessions on commerical self expression.
A strong believer in the power of positive thinking in the workplace and community, Sean believes we should leave this great city of Zhuhai better than we found it,in terms of creating employment and a greater community togetherness ,mindfulness between expats and locals through the instrument of charity involvement with Come Together Community.

Please click here to view the bio of our previous members. 请点击这里查看我们的前成员的简介。